In Indo-China, French and Spanish forces sail from Danang to attempt the capture Saigon 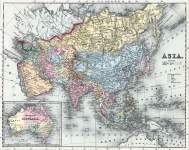 02/02/1859
Admiral Charles Rigault de Genouilly had led a French force, with support from Philipines based Spanish troops, into Indo-China the previous year.  With the stated aim to protect Vietnamese adherents to the Catholic faith, he had captured the port city of Da Nang in September, 1858.  Unable to move into the countryside due to intense Vietnamese resistance, the French decided to range further south and, leaving a garrison in Da Nang, sailed a force for Saigon, an important supply point for the Vietnamese resistance.  In a little over two weeks, the mostly undefended city was in French hands.  (By John Osborne)
Source Citation
Oscar Chapuis,The Last Emperors of Vietnam: From Tu Duc to Bao Dai (Westport,CT: Greenwood Publishing Group, 2000), 48.
How to Cite This Page: "In Indo-China, French and Spanish forces sail from Danang to attempt the capture Saigon," House Divided: The Civil War Research Engine at Dickinson College, http://hd.housedivided.dickinson.edu/node/24272.