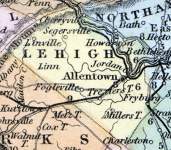 07/16/1860
Ground was broken under the direction of John Fritz for the state of the art industrial complex that would become the flagship of the Bethlehem Steel Company.  The newly reorganized Bethlehem Rolling Mill and Iron Company had selected the site for its proximity to a transport hub that linked Philadelphia, New York, and the coal regions of Pennsylvania. The factory began producing in 1861 and became the nucleus for the largest producer of iron and steel in the country.  Bethlehem Steel declared bankruptcy in 2001.  (By John Osborne)
Source Citation
Andrew Garn, Bethlehem Steel (New York: Princeton Architectural Press, 1999), 10.
How to Cite This Page: "In Pennsylvania, Bethlehem Rolling Mill and Iron Company break ground on their new factory," House Divided: The Civil War Research Engine at Dickinson College, http://hd.housedivided.dickinson.edu/node/32455.