In Utah, the Semi-Annual Conference of the Church of Jesus Christ of Latter-day Saints is in session 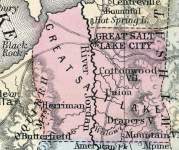 10/06/1865 - 10/09/1865
Plagued somewhat by wind and rains at the start and end of the gathering, the Conference was nevertheless reported as a success.  Extensive reports were made on the progress of settlements in northern Utah like Bear Lake Valley and in the far south along the Colorado. And Mormon leader Brigham Young floated the idea of sending five hundred ox-teams to the Missouri River in spring 1866, to aid Mormons otherwise too poor to reach the Utah settlements.  (By John Osborne)
Source Citation
"The Mormon Conference," New York Times, November 5, 1865, p. 6.
How to Cite This Page: "In Utah, the Semi-Annual Conference of the Church of Jesus Christ of Latter-day Saints is in session," House Divided: The Civil War Research Engine at Dickinson College, http://hd.housedivided.dickinson.edu/node/44817.