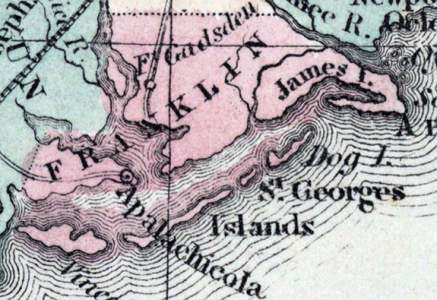 Apalachicola, Fa., c. h. and port of entry, Franklin co. 135 miles S. W. from Tallahassee, situated on a bluff at the mouth of the river of the same name. It is regularly laid out and occupies an area of one square mile. On Front Street there are a number of blocks of large brick stores, with granite fronts. The remaining portion of the town is built mostly of wood.  Apalachicola is a considerable mart for cotton. The river is navigated by steamboats and other boats, and the harbor generally contains a number of large vessels, landing and unloading at the wharves. (Gazetteer of the United States of America, 1854)
How to Cite This Page: "Apalachicola, FL," House Divided: The Civil War Research Engine at Dickinson College, https://hd.housedivided.dickinson.edu/index.php/node/18995.