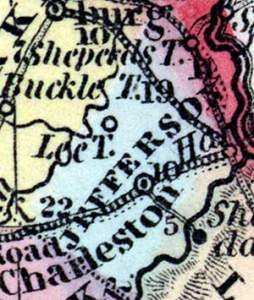 Shepherdstown is situated on the Potomac, in the northwestern part of the county, 5 miles north of the Baltimore and Ohio railroad, and about 12 miles above Harper's Ferry... It contains 6 or 8 mercantile stores, 3 merchant mills, 1 Episcopal, 1 Presbyterian, 1 German-Reformed, and 1 Lutheran church, and a population of about 1,600. There is a small stream, of considerable fall, which runs through the town, immediately opposite to which is an inlet-lock to the Chesapeake and Ohio Canal. (Historical Collections, 1852)
How to Cite This Page: "Shepherdstown, VA," House Divided: The Civil War Research Engine at Dickinson College, https://hd.housedivided.dickinson.edu/index.php/node/19688.