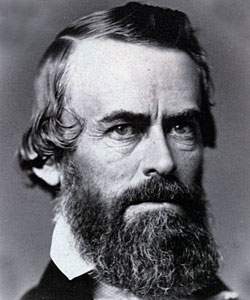 Thomas Langrell Harris was a prominent Illinois Democrat who supported Stephen Douglas and the Kansas-Nebraska Act. Harris was born in Norwich, Connecticut one of two sons of George and Henrietta Blake Harris. Despite the death of his father when he was only two, Harris graduated from Trinity College in Hartford in 1841. He immediately moved to Amherst County, Virginia where he qualified for the bar. By 1842, however, he had opened a practice at Petersburg in Menard County, Illinois. When the Mexican War broke out he raised a company and served with distinction in the 4th Illinois Volunteer Infantry. On his return he was elected to Congress as a Democrat, following Abraham Lincoln in the Sixth District in 1849. He supported the Compromise of 1850, however, and this cost him his seat when he lost the election to the Whig Richard Yates. He returned to Congress in 1855 in his reapportioned Illinois district and served two full terms. He was a good friend and vigorous supporter of Stephen Douglas, especially during the Kansas-Nebraska controversy. Even though he was by then seriously ill, Harris also worked closely with Douglas on his planning for the senatorial debates with Abraham Lincoln in 1858, advising him to make Lincoln the central issue. Three weeks after his further re-election in November 1858 Harris died of tuberculosis at his home in Petersburg. He left a wife and four children and was buried in the Rose Hill Cemetery in Petersburg. (By John Osborne)
Life Span
10/29/1816 to 11/24/1858
How to Cite This Page: "Harris, Thomas Langrell," House Divided: The Civil War Research Engine at Dickinson College, https://hd.housedivided.dickinson.edu/index.php/node/24006.