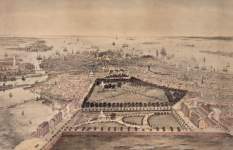 06/29/1860
A storm with heavy winds and lightning struck Boston and surrounding areas.  In Brighton a man was killed by lightning and another in West Dedham.  The Great Elm on the Common, one of the most famous trees in the country and fully grown before Boston was settled, suffered heavy damage in the wind.  The tree survived, however, until finally destroyed in a storm in 1876.  (By John Osborne)
Source Citation
The American Almanac and Repository of Useful Knowledge for the Year 1861 (Boston: Crosby, Nichols, Lee and Company, 1860), 412.
How to Cite This Page: "Storm in Boston area kills two and damages the Great Elm on Boston Common," House Divided: The Civil War Research Engine at Dickinson College, https://hd.housedivided.dickinson.edu/index.php/node/32348.