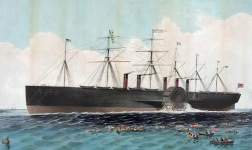 07/03/1860
The giant S.S. Great Eastern, recently arrived at the New York City docks, was opened to the public with a charge of admission of one dollar.  Despite qualms about the cost, more than 1,600 New Yorkers toured the ship during its "open" hours of nine a.m. to six p.m., with thousands more viewing the ship for free from the quayside.  (By John Osborne)
Source Citation
"The Great Eastern: First Day of the Exhibition, " New York Times, July 4, 1860.
How to Cite This Page: "The giant steamship "Great Eastern" opens for tours at the New York docks," House Divided: The Civil War Research Engine at Dickinson College, https://hd.housedivided.dickinson.edu/index.php/node/32370.