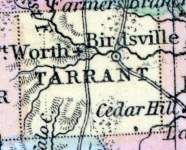 09/13/1860
Electoral tensions and paranoia among whites had led in July, 1860 to the "Texas Slave Insurrection Panic."  Anthony Bewley, a fifty-six year old white Methodist preacher accused of violent abolitionism, had fled his parish in Johnson County, Texas.  Vigilantes, however, tracked him to Missouri and returned him to Fort Worth, Texas on September 3, 1860.  Ten days later, late at night, a mob removed him from the town jail and hanged him from a pecan tree.  His skeleton was exhibited for several years on the roof of a storehouse in Fort Worth.  (By John Osborne)
Source Citation
Kent Biffle, A Month of Sundays (Denton, TX: University of North Texas Press, 1993), 58-59.
How to Cite This Page: "Reverend Anthony Bewley, a white Methodist preacher, lynched in Fort Worth, Texas," House Divided: The Civil War Research Engine at Dickinson College, https://hd.housedivided.dickinson.edu/index.php/node/32468.