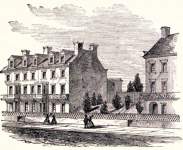 12/26/1860
Robert W. Barnwell, James Orr, and J.H. Adams had been appointed as "Commissioners" to the United States from the newly independent South Carolina. They arrived in Washington DC and took up residence in what they hoped to be their permanent house on K Street.  They communicated with the President of the United States two days later, announcing their arrival. Buchanan's response was cordial in its non-recognition.  (By John Osborne)
Source Citation
Benson J.Lossing, Pictorial History of the Civil War in the United States of America (Mansfield, OH: Estill & Co., 1866), 143.
How to Cite This Page: "South Carolina's commissioners to the United States arrive and take up residence in Washington," House Divided: The Civil War Research Engine at Dickinson College, https://hd.housedivided.dickinson.edu/index.php/node/34803.