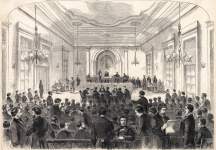 02/04/1861 - 02/27/1861
The Washington Peace Conference met at Willard's Hotel in the capital.  Made up of 132 delegates from twenty-one states, but lacking any representation from seceding states, with former president John Tyler in the chair, the gathering fashioned a set of constitutional amendments designed to appease the South and preserve the Union.  Its proposals were voted down in Congress on March 1, 1861.  (By John Osborne)
Source Citation
David Morris Potter and Don E. Fehrenbacher, The Impending Crisis, 1848-1861 (New York: Harper Collins, 1976), 546-550.
How to Cite This Page: "The Washington Peace Conference is meeting at Willard's Hotel in Washington DC," House Divided: The Civil War Research Engine at Dickinson College, https://hd.housedivided.dickinson.edu/index.php/node/35583.