In Manhattan, the Homeopathic Medical College of the State of New York graduates its first class 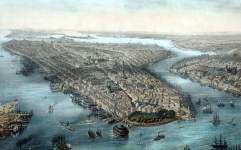