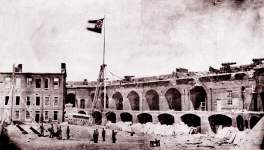 04/14/1861
Major Anderson and his command evacuated the battered fort in the afternoon.  A salute was fired to the federal flag as it was lowered.  Unfortunately, a mishap during the firing caused an explosion the killed Privates Daniel Hough immediately and Edward Gallway, who died April 19, 1861.  The Charleston steamer Isabel took off the garrison and transferred it the next morning to the S.S. Baltic outside the harbor.  The Baltic then sailed for New York.  (By John Osborne)
Source Citation
Benson J. Lossing, Pictorial History of the Civil War in the United States of America (Mansfield, OH: Estill & Co., 1866), 330-332.
How to Cite This Page: "Major Anderson and his men evacuate Fort Sumter and sail for New York," House Divided: The Civil War Research Engine at Dickinson College, https://hd.housedivided.dickinson.edu/index.php/node/35888.