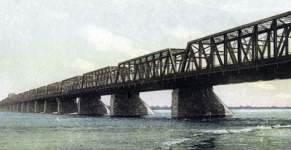 11/25/1859
In the afternoon of November 24, 1859, the first railway train, with locomotives pulling a single car carrying around fifty people, passed over the new Victoria Bridge linking Montreal across the Saint Lawrence in Quebec.  Freight trains began using the bridge regularly in mid-December.  At the time of its opening the bridge, begun in 1854, was the longest in the world at around two miles.  Renamed the Victoria Jubilee Bridge in 1897, it remains in use today.  (By John Osborne)
Source Citation
The American Almanac and Repository of Useful Knowledge (Boston: Crosby, Nichols, Lee and Company, 1861), 405.
How to Cite This Page: "The first railway train crosses the new Victoria Bridge across the Saint Lawrence in Quebec," House Divided: The Civil War Research Engine at Dickinson College, https://hd.housedivided.dickinson.edu/index.php/node/37446.