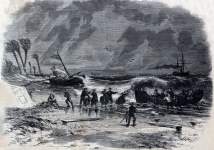 03/16/1861
The Mary Kingsland was en route from New York when she was wrecked on a barren stretch of Florida coastline during a severe storm.  All aboard managed to scramble ashore and the survivors, including a theatrical troupe fro New York City, endured a harsh few days on the beach as the storm continued.  They were rescued when the steamship Cahawba arrived, sent in boats, and picked them up.  (By John Osborne)
Source Citation
Frank Leslie's Illustrated Newspaper, March 30, 1861, p. 307.
How to Cite This Page: "Survivors of a shipwreck on the barren Florida coast endure several days of hardships before rescue," House Divided: The Civil War Research Engine at Dickinson College, https://hd.housedivided.dickinson.edu/index.php/node/37829.