John Ericsson's new ironclad is commissioned as the U.S.S. Monitor 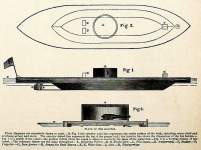 03/04/1862
To counter the reported conversion of the Confederate's Merrimack into an ironclad, the Navy put out bids for a ship to match her.  John Ericsson won the contract with a controversial design and on October 28, 1861, the keel of the Monitor was laid at Greenpoint, New York.  The first deep-water U.S. Navy vessel to be built from scratch as an ironclad, she was completed in a remarkable three months and five days and turned over to the navy on February 19, 1862. She was commissioned and famously saw action on March 9, 1862.  (By John Osborne)
Source Citation
Bruce Linder, Tidewater's Navy: an illustrated history (Annapolis, MD: U.S. Navy Institute Press, 2005), 72.
How to Cite This Page: "John Ericsson's new ironclad is commissioned as the U.S.S. Monitor," House Divided: The Civil War Research Engine at Dickinson College, https://hd.housedivided.dickinson.edu/index.php/node/38177.