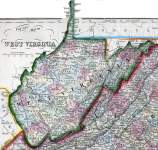 08/20/1861
The second Wheeling Convention of Virginia's western counties had assembled on June 11, 1861 and returned from a recess on this day.  The gathering then called for and passed an ordinance " to provide for the formation of a new State out of a portion of the territory of this State." An elected constitutional convention met between November 26, 1861 and February 18, 1862, and produced a constitution put to a popular vote in April 1862.  West Virginia became the thirty-fifth state of the Union on June 20, 1863.  (By John Osborne)
Source Citation
The American Annual Cyclopedia and Register of Important Events of the Year 1862 ... (New York: D. Appleton & Co., 1869), 801.
How to Cite This Page: "The Wheeling Convention of the western Virginia counties passes an ordinance setting up a new state ," House Divided: The Civil War Research Engine at Dickinson College, https://hd.housedivided.dickinson.edu/index.php/node/38191.