In Greece, young army officers initiate a revolt against the ruling royal family 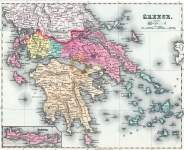 02/12/1862 - 02/13/1862
A revolt of young army officers broke out in Greece against the rule of the Bavarian-born royal family.  Centered on the port and fortress town of Navplion in the northeast Peloponnese, the revolt was put down by the Bavarian-led royal army of King Otto which captured Navplion on April 20, 1862.  A later revolt, in October 1862, however, was successful in deposing the monarchy and Otto spent the remainder of his life in exile.  (By John Osborne)
Source Citation
The Annual Register or a View of the History and Politics of the Year 1862 (London: F. & J. Rivington, 1863), 199-201.
How to Cite This Page: "In Greece, young army officers initiate a revolt against the ruling royal family ," House Divided: The Civil War Research Engine at Dickinson College, https://hd.housedivided.dickinson.edu/index.php/node/38604.