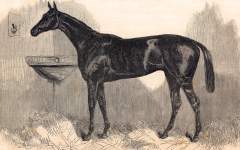 05/27/1863
On the Fashion Course at Flushing in Queens, two of the biggest names in the harness racing world squared off in the first of a series of match races with a total of $30,000 at stake.  The first day's race, before a reported crowd of more than seven thousand, saw General Butler defeat George M. Patchen in the best three of five heats. Butler, the favorite, lost the first heat but won the following three contests to take the day. (By John Osborne)
Source Citation
"The Turf: Fashion Course - The Trotting Match for $5,000," New York Times, May 28, 1863, p. 5.
How to Cite This Page: "In New York City, "General Butler" defeats "George M. Patchen" in a harness racing series worth $5000," House Divided: The Civil War Research Engine at Dickinson College, https://hd.housedivided.dickinson.edu/index.php/node/39586.