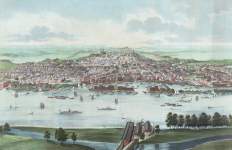 06/17/1863
All six hundred workers on the Central Railroad Company had struck the previous day for higher wages.  The company, fearing the loss of perishable goods, had quickly agreed to raise the wages of freight laborers.  When they reported for work in the morning, they were met by track laborers angry over their lack of solidarity.  A riot ensued and fifty city police were forced into action. Injuries were reported on both sides.  (By John Osborne)
Source Citation
"Strikers' Riot at Albany," Chicago Tribune, June 20, 1863, p. 1.
How to Cite This Page: "Striking railroad company workers riot in Albany, New York ," House Divided: The Civil War Research Engine at Dickinson College, https://hd.housedivided.dickinson.edu/index.php/node/39947.