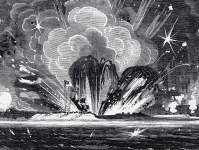 09/08/1863
Fort Moultrie, defending Charleston Harbor from its position on Sullivan's Island, had been under serious bombardment for months.  A 15 inch shell from the U.S.S. Weehalken struck home in one of the fort's magazines and caused a massive explosion. The damage was severe but the fortress still held and was not abandoned until February 1865, by that time almost only rubble.  (By John Osborne)
Source Citation
"Important from Charleston: The Explosion of a Magazine in Fort Moultrie," New York TImes, September 14, 1863, p.1.
How to Cite This Page: "In Charleston Harbor, Confederate Fort Moultrie suffers a massive magazine explosion under U.S. Navy gunfire," House Divided: The Civil War Research Engine at Dickinson College, https://hd.housedivided.dickinson.edu/index.php/node/41124.