Near New York, the steamer "Isaac Newton" explodes and burns in the Hudson River, killing twelve 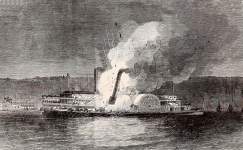 12/05/1863
The steamboat Isaac Newton left the Cortlandt Street dock in New York City at six p.m., bound for Albany with around a hundred passengers aboard.  Soon after, she exploded a boiler and the entire vessel took fire.  Passing vessels took off most of the passengers but half a dozen crewmen were killed outright and around fifteen other passengers and crew badly scalded or burned. A total of twelve people eventually died.   (By John Osborne)
Source Citation
"The Burning of the Isaac Newton, " New York Times, December 7, 1863, p.1.
How to Cite This Page: "Near New York, the steamer "Isaac Newton" explodes and burns in the Hudson River, killing twelve," House Divided: The Civil War Research Engine at Dickinson College, https://hd.housedivided.dickinson.edu/index.php/node/41363.