In North Carolina, Confederate sailors and marines capture a Union gunboat in a night attack 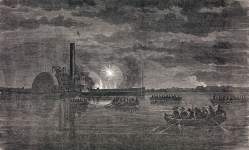 02/02/1864
At around 2:30 am, in a heavy rain, a large force of three hundred Confederate seamen and marines in fourteen boats attacked and seized the U.S.S. Underwriter, a 180 foot sidewheeler gunboat moored with its boilers banked in the Neuve River in North Carolina. Without steam up, the expedition's leader, Commander John Taylor Wood, determined that the prize could not be sailed away and ordered her burned. Confederate losses were five killed.  (By John Osborne)
Source Citation
John V. Quarstein, The CSS Virginia: Sink Before Surrender (Charleston, SC: The History Press, 2012), 246.
How to Cite This Page: "In North Carolina, Confederate sailors and marines capture a Union gunboat in a night attack," House Divided: The Civil War Research Engine at Dickinson College, https://hd.housedivided.dickinson.edu/index.php/node/41592.