At the Quebec Conference, delegates announce their seventy-two resolutions for a united Canada 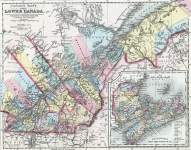 10/27/1864
Following up on the earlier meeting at Charlottetown, representatives from New Brunswick, Nova Scotia, Prince Edward Island, and the Province of Canada had gathered in Quebec to discuss the framework of a united Canada. The conference produced seventy-three resolutions that were then submitted to provincial legislatures. This led directly to the London Conference in late 1866 and the British North America Act of 1867. (By John Osborne)
Source Citation
Barry M. Gough, Historical Dictionary of Canada (Lanham, MD: Scarecrow Press, 2011), xxxii.
How to Cite This Page: "At the Quebec Conference, delegates announce their seventy-two resolutions for a united Canada ," House Divided: The Civil War Research Engine at Dickinson College, https://hd.housedivided.dickinson.edu/index.php/node/42752.