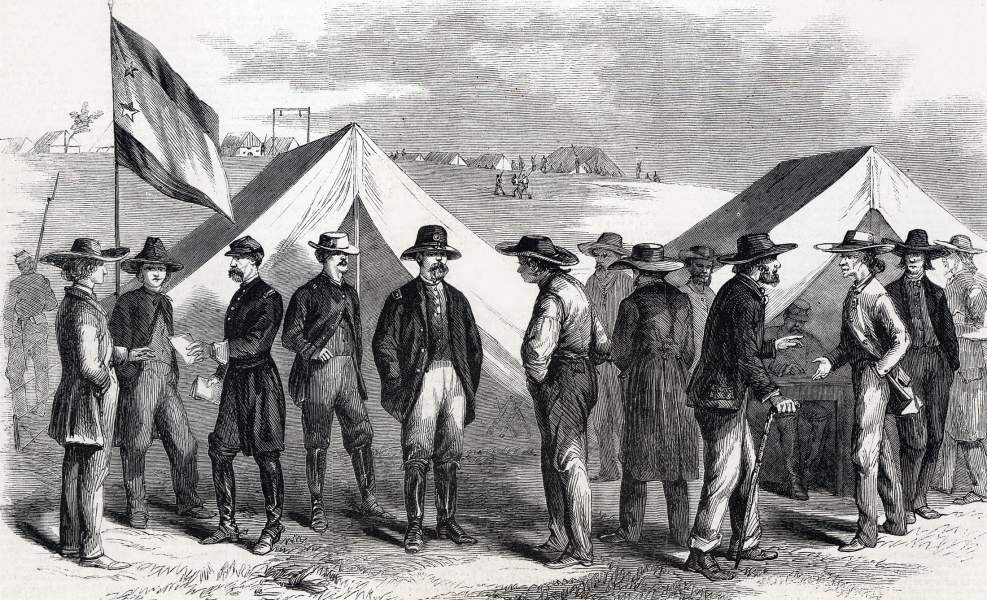 Scanned by
Don Sailer, Dickinson College
Scan date
08/25/2011
Notes
Sized, cropped, and adjusted for use here by John Osborne, Dickinson College, January 23, 2015.
Depicted ContentHarrisonburg, VA
Image type
engraving
Original caption
Sheridan's Campaign - Scene at Gen' Crook's headquarters-The Loyal Dunkards getting passes to go North. - From a sketch by our Special Artist, J.E. Taylor.
Source citation
Frank Leslie's Illustrated Newspaper, October 29, 1864, p. 84.
Source note
"LOYAL DUNKARDS GOING NORTH.  Our Artist represents a scene at Harrisonburg, at the headquarters of Gen. Crook, on the 2d of October.  The fortunes of war have made the fertile valley of the Shenandoah, like Belgium and Lombardy, a favorite place for operations. Armies swept backward and forward, leaving terrible traces of their passage, but now the terrible fiat has gone forth - it is to be desolated. Northward and Southward, as their predilictions decided, the rural population must go.  Among those who set their faces Northward were a number of Dunkards, a sect of quiet non-combatants, resembling the Quakers, and one of the religious communities in which Pennsylvania has been so fruitful. Capt. Cherington, the Provost-Marshal, on the right, is handing them passes, and Capt. Douglas, the Commissary of Subsistence, is giving the home-forsaking Dunkards information as to the means of reaching friends, while Maj. Stephens, Inspector-General of Gen. Crook's corps, is looking on. The number of loyal men is great. About 100 families came North with one supply train, and more are coming..."  Frank Leslie's Illustrated Newspaper, October 29, 1864, p. 84.
How to Cite This Page: "Loyal Dunkard pacifists receiving passes to go North, Harrisonburg, Virginia, October 1864, artist's impression, zoomable image," House Divided: The Civil War Research Engine at Dickinson College, https://hd.housedivided.dickinson.edu/index.php/node/43380.