Reckless remark over the death of President Lincoln leads to mob violence in Fall River, Massachusetts 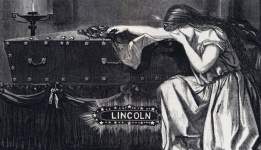 04/15/1865
Boston newspapers reported that as Fall River crowds were gathered around the morning bulletins with the grim news from Washington, a shopkeeper named Leonard Wood was heard to announce this the best news he had heard in years.  This foolhardy remark earned him a beating and when he ran to his store and locked himself in, police had to rescue him.  As it was, the angry mob smashed all the windows in his shop front.  (By John Osborne)
Source Citation
"A Rebel Sympathizer Mobbed in Fall River," Boston Herald, April 17, 1865, p. 4
How to Cite This Page: "Reckless remark over the death of President Lincoln leads to mob violence in Fall River, Massachusetts," House Divided: The Civil War Research Engine at Dickinson College, https://hd.housedivided.dickinson.edu/index.php/node/43729.