In the Caribbean, relief ships rescue passengers wrecked on a remote desert island the week before 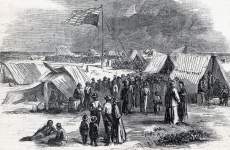 06/07/1865
Eight days before, the steamship Golden Rule with more than 600 passengers and crew was on a run from New York City to Colón, Panama when she hit a reef in the southern Caribbean. The people aboard evacuated to the small coral island of El Ronconor, "the Snorer."  They remained there until relief vessels arrived, alerted to their difficulties by a boat the Golden Rule sent to Colón. No injuries were reported.  (By John Osborne)
Source Citation
"Wreck of the 'Golden Rule,'" Harper's Weekly Magazine, July 8, 1865, p. 420.
How to Cite This Page: "In the Caribbean, relief ships rescue passengers wrecked on a remote desert island the week before," House Divided: The Civil War Research Engine at Dickinson College, https://hd.housedivided.dickinson.edu/index.php/node/44100.