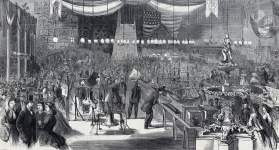 09/12/1865
The month-long thirty-sixth annual fair of the American Institute opened at the Twenth-Second Regiment Armory on Fourteenth Street in New York City with a an exhibit across four large rooms.  The series of exhibits, lectures, music, and meetings, the first gathering of the prestigious association for some time went on in the city until October 19, 1865, promoting its long-term goals of advance in art, invention, and agriculture.  (By John Osborne)
Source Citation
"Annual Fair of the American Institute," Harper's Weekly Magazine, October 7, 1865, p. 632.
How to Cite This Page: "The thirty-sixth annual fair of the American Institute opens in New York City," House Divided: The Civil War Research Engine at Dickinson College, https://hd.housedivided.dickinson.edu/index.php/node/44448.