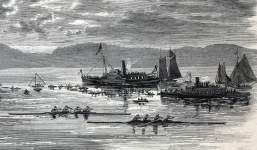 09/25/1865
For a purse of two thousand dollars and the title of national champion, the Ward brothers of Newburgh, New York raced the Biglin brothers of New York City over a five mile course on the Hudson River opposite the village of Sing Sing.  Raced between one and three in the afternoon, the contest, up-river for two and a half miles and then down, was a close one but resulted in the Newburgh boat winning by forty-five seconds.  (By John Osborne)
Source Citation
"The Four-oared Race Between the Ward Brothers and the Biglin Brothers," New York Times, September 26, 1865
How to Cite This Page: "Two four-man crews race on the Hudson River for a national rowing championship and two thousand dollars," House Divided: The Civil War Research Engine at Dickinson College, https://hd.housedivided.dickinson.edu/index.php/node/44598.