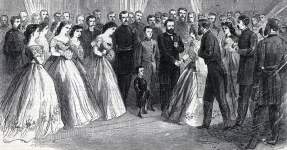 11/20/1865
Towards the end of a highly successful and public visit to New York City, Lieutenant-General U.S. Grant, his family, and staff, were hosted at a grand reception at the Fifth Avenue Hotel in the city. Around two thousand luminaries from the army, congress, and city government were invited and began to arrive around 7:30 p.m. in what the press reported as one of the most remarkable social events in the city's history. (By John Osborne)
Source Citation
"Gen. Grant's Reception: The Manner in which the Hero was Honored," New York Times, November 21, 1865, p. 1.
How to Cite This Page: "At a gala reception in New York City, thousands greet General Ulysses S. Grant and his family," House Divided: The Civil War Research Engine at Dickinson College, https://hd.housedivided.dickinson.edu/index.php/node/44718.