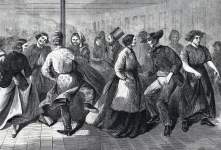 11/06/1865
In the evening, at New York City's Asylum for the Insane on Blackwell's Island in the East River, a dance was held in celebration of the completion of the first of four new buildings.  Many of the patients took part and newspaper artists were on hand to record the festivities.  The press reported that the significant extensions in facilities were needed to provide for the growing population of the city.  (By John Osborne)
Source Citation
"Dancing by Lunatics," Harper's Weekly Magazine, December 2, 1865, p. 765.
How to Cite This Page: "In New York's East River, Blackwell Island Asylum celebrates new buildings with a ball for the patients," House Divided: The Civil War Research Engine at Dickinson College, https://hd.housedivided.dickinson.edu/index.php/node/44721.