Election Day across much of the United States 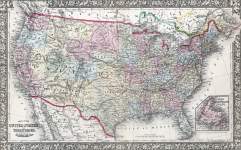 11/07/1865
Elections at all levels were held across many of the United States.  In the East and Midwest, Unionist and Republican tickets were largely more dominant than usual, even in areas like Peoria, Illinois which had seen strong Democratic representation earlier. There the local press called the county "redeemed from the stench of Copperheadism."  Returning soldiers were seen as crucial to Republican gains.  (By John Osborne)
Source Citation
"Victory: The Backbone of the Copperheads Broken," Chicago Tribune, November 8, 1865, p. 1.
How to Cite This Page: "Election Day across much of the United States," House Divided: The Civil War Research Engine at Dickinson College, https://hd.housedivided.dickinson.edu/index.php/node/44822.