In New York, the new railroad bridge linking Albany and Rensselaer across the Hudson opens for service 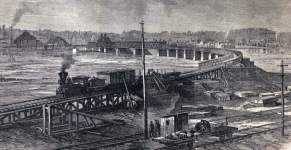 02/22/1866
A new railway bridge across the Hudson at Albany had been chartered in 1856 and begun in 1864. It opened for regular passenger service this day, having taken its first locomotive four days earlier.  The span was 2020 feet long and operated with a swing bridge to allow river traffic to pass through.  The Livingston Avenue Bridge, as it is called, was refurbished in the early twentieth century and is still used, carefully, today. (By John Osborne)
Source Citation
"Albany Railroad Bridge,"  in Peter R. Eisenstadt, Laura-Eve Moss (eds.), The Encyclopedia of New York State (Syracuse, NY: Syracuse University Press, 2005), 49.
How to Cite This Page: "In New York, the new railroad bridge linking Albany and Rensselaer across the Hudson opens for service," House Divided: The Civil War Research Engine at Dickinson College, https://hd.housedivided.dickinson.edu/index.php/node/45040.