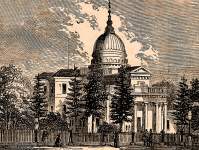 01/23/1866
The New Jersey legislature, with its new Republican majority, finally ratified the Thirteenth Amendment to the Constitution of the United States, more than a month after it had been declared law.  The earlier Democrat-controlled body had rejected the measure on March 16, 1865.  The vote in the state senate was 13 to 8 in the affirmative.  (By John Osborne)
Source Citation
"The New Jersey Legislature: Passage of the Constitutional Amendment," New York Times, January 24, 1866, p. 5.
How to Cite This Page: "In New Jersey, the state legislature finally ratifies the Thirteenth Amendment," House Divided: The Civil War Research Engine at Dickinson College, https://hd.housedivided.dickinson.edu/index.php/node/45120.