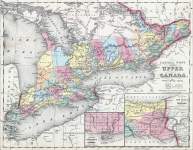 A mass meeting was held in Kingston in present-day Ontario at the end of which a resolution was passed calling on Canadians to agitate politically for eventual annexation to the United States.  The meeting specifically noted the recent proposal of Nathaniel Banks of Massachusetts in the U.S. Congress to admit Nova Scotia, New Brunswick, Canada West, and Canada East as U.S. states.  Neither proposal gained any traction.  (By John Osborne)

How to Cite This Page: "A mass meeting in Ontario calls for annexation of parts of Canada to the United States," House Divided: The Civil War Research Engine at Dickinson College, https://hd.housedivided.dickinson.edu/index.php/node/45694.