The Second Plenary Council Meeting of the U.S. Roman Catholic Church is meeting in Baltimore, Maryland. 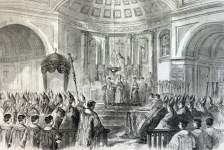 American Catholic clergy gathered in Baltimore, Maryland for the Second Plenary Council with seven archbishops, thirty-nine bishops, and two abbots in attendance under the leadership of Marin Spalding, Archbishop of Baltimore. The previous plenary gathering had been in 1852 and there would be another in 1884.  The deliberations of the meeting produced a series of decrees, largely a set of warnings of "errors" and a call for consistent discipline across the dioceses of the United States.  (By John Osborne).

"Roman Catholic Church," The American Cyclopedia and Register of Important Events of the Year 1866 (New York: D. Appleton and Company, 1873), 376.

How to Cite This Page: "The Second Plenary Council Meeting of the U.S. Roman Catholic Church is meeting in Baltimore, Maryland.," House Divided: The Civil War Research Engine at Dickinson College, https://hd.housedivided.dickinson.edu/index.php/node/45783.