At Margate on the English coast, a miniature sailing ship completes a remarkable Atlantic crossing. 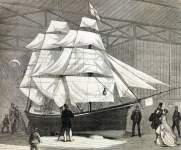 The miniature sailing ship Red, White, and Blue, a regulation three-masted square rigger but only 26 feet long and 2.35 tons, had sailed from Sandy Hook, New Jersey on July 9, 1866.  Aboard were two expert sailors, Captain James Hudson and Mate F.E. Fitch, together with their dog "Fanny."  The tiny sailing ship reached Margate on the Kent coast of England on this day, having crossed the ocean in a remarkable thirty-five days. Organized as a publicity stunt by O.K. Ingersoll for his new lifeboat design, the feat met with scepticism at the time but was later proved to be completely valid. (By John Osborne)

How to Cite This Page: "At Margate on the English coast, a miniature sailing ship completes a remarkable Atlantic crossing. ," House Divided: The Civil War Research Engine at Dickinson College, https://hd.housedivided.dickinson.edu/index.php/node/45788.