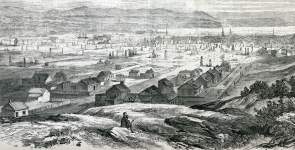 Strong winds helped produce a massive fire that destroyed large sections of the city of Quebec in Canada. Up to a third of population, as many as 20,000 people were rendered homeless when 2000 dwellings were burned.  The Lower Town was largely spared and the old wall protected the old city but recents cuts in firefighting funds were punished over much of the area.  (By John Osborne)