Democrats retake the Delaware governor's mansion and retain control of the State Legislature. 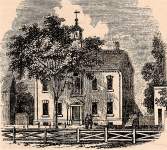 The state elections saw the Democrats retake the governor's office and hold their control in both houses of the legislature.  Gove Saulsbury, the elder brother of two U.S. Senators, beat his Republican opponent James Riddle by 9,810 votes to 8,598 and replaced Republican William Cannon as governor while the Democrats held the State Senate by six seats to three and the House 15 seats to six.  (By John Osborne)

How to Cite This Page: "Democrats retake the Delaware governor's mansion and retain control of the State Legislature.," House Divided: The Civil War Research Engine at Dickinson College, https://hd.housedivided.dickinson.edu/index.php/node/45919.