In Raleigh, the North Carolina legislature rejects the Fourteenth Amendment by a large margin. 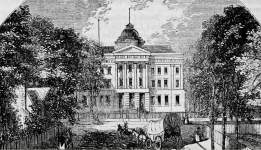 When the Fourteenth Amendment had been sent to the states, Governor Jonathan Worth of North Carolina, like other southerners, reacted strongly against it, considering it the end of the sovereignty of the states. A legislative committee was appointed which offered on December 6, 1866 a lengthy and scathing negative recommendation stating above all that the change would "swallow up all the states" and concentrate power in federal hands.  The state legislature voted on this day to reject the amendment; forty-three to one in the senate and ninety-three to ten in the house.  (By John Osborne)

How to Cite This Page: "In Raleigh, the North Carolina legislature rejects the Fourteenth Amendment by a large margin.," House Divided: The Civil War Research Engine at Dickinson College, https://hd.housedivided.dickinson.edu/index.php/node/45944.