With benefactor George Peabody in attendance, the Peabody Institute is officially inaugurated in Baltimore. 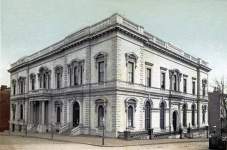 The Peabody Institute, begun nine years before and now operating as the significant intellectual core of Baltimore, was formally inaugurated in the presence of its benefactor, the American-born British banker George Peabody, back in the United States on a visit. Governor Swann of Maryland gave a speech of welcome and Peabody himself spoke, making a plea for Baltimore to become a "daystar of political tolerance and charity" turning its back on the divided past and becoming an example of reconciliation after "the ravages of war."  (By John Osborne)

How to Cite This Page: "With benefactor George Peabody in attendance, the Peabody Institute is officially inaugurated in Baltimore.," House Divided: The Civil War Research Engine at Dickinson College, https://hd.housedivided.dickinson.edu/index.php/node/46037.