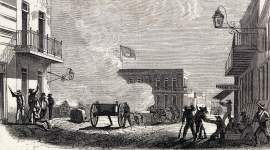 Adding to the confusion along the Texas/Mexico border and the danger of an international incident, Colonel Isaac Davis and black volunteers from his 118th U.S.C.T., along with a group of American "adventurers" led by R. Clay Crawford, had crossed the Rio Grande and taken control of the Mexican border port of Bagdad, then in the hands of Imperial Mexican forces rumored to be holding American prisoners.  Davis had withdrawn his men almost immediately, leaving Crawford and his men to loot the town.  Liberal Mexican insurgent forces arrived the next day to take charge but order was not restored until days later, when U.S. General Godfrey Wietzel, regional commander in Texas, arrived, declared military law, and arrested Crawford and his men.  (By John Osborne)