In Montgomery, the Alabama legislature votes overwhelmingly to reject the Fourteenth Amendment. 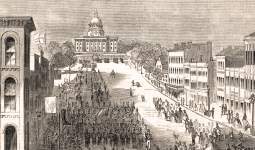 The Alabama legislature, following those of Texas, Georgia, and Florida, voted not to ratify the Fourteenth Amendment to the United States Constitution.  Both houses voted overwhelmingly on this day to reject the measure.  The Senate voted two votes for and twenty-seven against, while the State House voted eight to sixty-nine to reject.  Alabama later voted to ratify, on July 13, 1868, in radically transformed political circumstances.(By John Osborne)

How to Cite This Page: "In Montgomery, the Alabama legislature votes overwhelmingly to reject the Fourteenth Amendment.," House Divided: The Civil War Research Engine at Dickinson College, https://hd.housedivided.dickinson.edu/index.php/node/46138.