In New York City, the Winter Garden Theater is destroyed by fire. 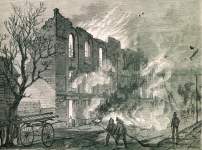 Just before nine in in the morning, fire broke out under the stage at the famous Winter Garden Theater on New York City's Broadway.  The fire spread remarkable quickly and after less than a half hour, the building's roof fell in.  Although no-one was harmed, the destruction was reported to have cost around $250,000 in addition to the total loss of valuable collections of costumes of the actors, including Edwin Booth, then performing Hamlet at the venue.  (By John Osborne)

How to Cite This Page: "In New York City, the Winter Garden Theater is destroyed by fire.," House Divided: The Civil War Research Engine at Dickinson College, https://hd.housedivided.dickinson.edu/index.php/node/46433.