The New York steamship burns off Cape Hatteras and eleven aboard are killed. 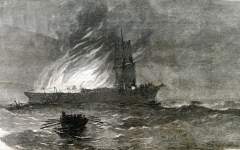 Bound from New York to Charleston, South Carolina, the steamship Andalusia caught fire off Cape Hatteras, North Carolina, burned to the waterline, and sank.  Most of the passengers and crew were able to take to the boats in relatively calm seas but eleven people were reported lost.  The 200 foot, 1000 ton Andalusia was a former U.S. Navy vessel, commissioned in May 1864 as the USS Inka but sold at the end of the war into civilian hands.  (By John Osborne)

How to Cite This Page: "The New York steamship burns off Cape Hatteras and eleven aboard are killed.," House Divided: The Civil War Research Engine at Dickinson College, https://hd.housedivided.dickinson.edu/index.php/node/46446.