Local congressman complains to President Johnson that soldiers are being kept from voting in Carlisle, Pennsylvania. 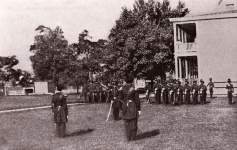 Brevet Brigadier-General William N. Grier, the commander at the Carlisle Barracks outside Carlisle, Pennsylvania, had ordered his troops to stay away from the town on Election Day, fearing that the notorious antipathy between the soldiers and the Carlisle "roughs" would flare up in the excitement.  Adam J. Glossbrenner, the local Democratic congressman, heard of the restraint and complained directly to President Johnson by telegram, claiming that around twenty soldiers eligible to vote were being denied that right.  Although Grier explained his motivations, the retraints were immediately lifted and the day passed peacefully, unlike the following year, when a serious riot broke out involving soldiers on Election Day.  (By John Osborne)

How to Cite This Page: "Local congressman complains to President Johnson that soldiers are being kept from voting in Carlisle, Pennsylvania.," House Divided: The Civil War Research Engine at Dickinson College, https://hd.housedivided.dickinson.edu/index.php/node/46452.