In Kansas, Cheyenne and Lakota warriors wipe out a U.S. Army detail of twelve men. 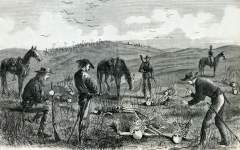 Carrying a dispatch to the Seventh Cavalry, then patrolling south of Fort Sedgwick in Kansas, Second Lieutenant Lyman S. Kidder and a detail of ten other soldiers, together with a Sioux scout named Red Bead were intercepted and killed in a short fight in present-day Sherman County, Kansas.  Their attackers were a small combined force of Cheyenne Dog Soldiers and Oglala Sioux. Their decomposing and mutilated remains were discovered by the Seventh two weeks later. (By John Osborne)

How to Cite This Page: "In Kansas, Cheyenne and Lakota warriors wipe out a U.S. Army detail of twelve men.," House Divided: The Civil War Research Engine at Dickinson College, https://hd.housedivided.dickinson.edu/index.php/node/46619.