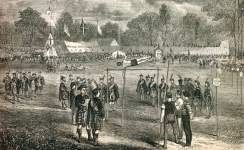 Several Scottish cultural societies in the United States and Canada, notably the New York Caledonian Club, had been meeting for a year to inaugurate an international gathering of the clans in North America.  On this day, clubs from both countries, along with visitors from Scotland, celebrated a Highland Games held at Jones Wood in New York City.  Other gatherings followed although interest tended to wane in the later years of the nineteenth century until a mid-twentieth century revival.  (By John Osborne)

How to Cite This Page: "The first International Caledonian Games in North America is under way in New York City," House Divided: The Civil War Research Engine at Dickinson College, https://hd.housedivided.dickinson.edu/index.php/node/47478.