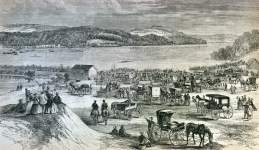 Tne crews of Harvard and Yale Colleges met for their annual contest, a series that had begun in 1852.  Racing on Lake Quinsigamond near Worcester, Massachusetts on a course up the lake and back over three miles, Harvard won for the second year running in a time of eighteen minutes and thirteen seconds, beating the Yale crew by more than a minute.  (By John Osborne)