Emperor Maximilian I of Mexico is executed by the victorious Liberal Government of Benito Juarez. 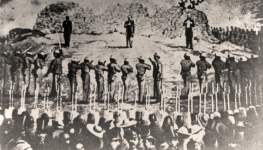 Mexican Emperor Maximilian I, along with his staff, had surrendered at a convent in the city to Liberal General Mariano Escobedo when Querétaro had fallen to insurgent forces the month before.  On the orders of the central Liberal command, the Emperor and his two main remaining military commanders, General Miguel Miramón and General Tomás Méjìa, had been tried before a public military tribunal at the Itirbede Theater in Querétaro on June 12-14, 1867.  They were each found guilty of bearing arms against the Republic and given the mandatory sentence of death.  Just after dawn on this day, the sentence was carried out by firing squad on the edge of the city before a large crowd of onlookers.  (By John Osborne)

How to Cite This Page: "Emperor Maximilian I of Mexico is executed by the victorious Liberal Government of Benito Juarez.," House Divided: The Civil War Research Engine at Dickinson College, https://hd.housedivided.dickinson.edu/index.php/node/47501.